Posted on September 22, 2014 by livingdonorlove

I’m here to talk of my life–saving journey, an unbelievably humbling as well as inspiring one, I must say.

My journey has been quite long, starting in 1978, when I was diagnosed with Chronic Kidney Insufficiency, having had only one kidney, and that one was functioning at about 50%.  Now, that’s the good news in that my kidney has lasted so long, way beyond any expectation of my doctors.  I don’t fit any of the traditional predictable kidney trends.   For that, I am eternally grateful.

The bad news is that last October I suffered from a severe viral infection that affected my kidney functioning to the point of reaching the stage of renal failure.  At that point, my nephrologist recommended I find a live kidney donor in anticipation of a transplant, since she predicted that my kidney would totally fail within 3 to 6 months.  This action would be the best choice for me over a deceased donor kidney or dialysis.  A deceased donor was not really an option because there is a 5 to 7 year waiting list, and a transplant versus dialysis was my best opportunity for a better quality of life and a greater life expectancy.

As you might imagine, this really threw me into a major funk, a numbness that drained all the life out of me.  It wasn’t just the reality of the seriousness of my illness, but now in an effort to find a kidney, I also had to make very public my need for the help of others and my own vulnerability.  This ran very counter to my own internal proclivity to be private as well as self-reliant, but it was to be the first of many, uncomfortable personality stretches that though painful at first, in the end presented me with the opportunity for personal growth.

My saving grace was my wife Marti, Team Gary, and BJBE.  Marti was the impetus, the organizer, the cheerleader, the driving force, and my guardian angel for a remarkable team of family and friends that carried out a national campaign to find a kidney for me.  This gesture just blew me away, fueled my spirit and soul with hope, as well as further validated my faith in humanity.

Team Gary was uplifting and inspirational in its belief that failure was not an option.  Harvey Mysel, a double kidney transplant recipient himself, provided us with the roadmap of how to set up our multifaceted campaign.  After educating ourselves on what steps to take, we contacted our niece Laura, and within 24 hours, she set up a webpage and a Facebook page to spread our message.  Then, Marti reached out locally and around the country (California, Florida, New York, Oregon, Virginia, and Washington) to convene our team.  The team was a source of innumerable creative resources.  There were posters put up throughout various communities, buttons worn, a You Tube video, a website with weekly blogs, a Facebook page, Twitter accounts, business cards, flyers, Emails, tables with volunteers at events, Pioneer Press articles, JUF News articles, reaching out to churches, synagogues, corporations,  universities, alumni  associations across the country and more, much much more.

The BJBE crusade was particularly heartwarming to me.  Marti presented a number of options how they might help to the clergy and staff, and their response was that they would not just do all of them, but more.  Immediately, a congregational –wide Email was sent out by the clergy, personally appealing to the members to be tested as donors.  There were appeals from the Bima on a weekly basis and recruiting tables set up for our volunteers at public events.  The Caring Community had postings in the weekly electronic Bulletin, and the Social Action Network reached out to other synagogues on our behalf.  Updates were regularly posted in the monthly print Bulletin as well as in the Shabbat handout, and clergy sent out various appeals on their social networks.

In addition, senior staff Kelly Goldberg kindly volunteered to be an active member on Team Gary, and Brian Kunz, a congregant who donated his own kidney to a neighbor, made himself available to talk to anyone having interest in donating to me.

Lastly, there was the constant and continuous show of support, caring, and prayer from the clergy, staff, and congregation that served to sustain us throughout this 8 month ordeal.

The outcome of all this wondrous effort was that an unbelievable 7 donors were accepted as kidney matches for me.  I was emotionally in awe of what goodness there can be in people.

The next step was my going through numerous pre-surgery testing to assure that I continued to be a good candidate for a transplant.  I am extremely thankful that all went well, and I was given the green light.  Then, a new curve appeared in my travels.  My internist had been taking me off various allergy medicines and vitamins to see if this might have any effect on my kidney.  Lo and behold, my functioning stabilized, returned to my baseline, and off the renal failure level.  This really represented a mixed bag.  On one hand, it really uplifted me and gave me new hope.  On the other side of the issue was this is the optimum time for a kidney transplant and waiting could close the door on that option. We were tormented, confused, and our heads and hearts were spinning.  In an effort to get clarification on this issue, I decided to seek physician opinions as to what actions to take, and being prone to analysis paralysis, I decided to stop after 6 recommendation as if that wasn’t a bit of excess.  The outcome score was 4 to 2 in support of leaving well enough alone, at least for right now.  The coup de grace was that my incredible kidney donor indicated that he/she (anonymous) would hold off until I was ready.  That gesture literally took my breath away.

I, now live one day at a time, grateful for each day of health and all the blessings my life provides me.  I’m tested monthly and in contact with the kidney transplant team every 3 months.   I have the choice of worrying or living life.  Being the optimistic Agnostic that I am, I let go to G-d and say, I choose life. 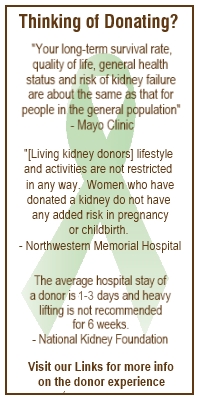